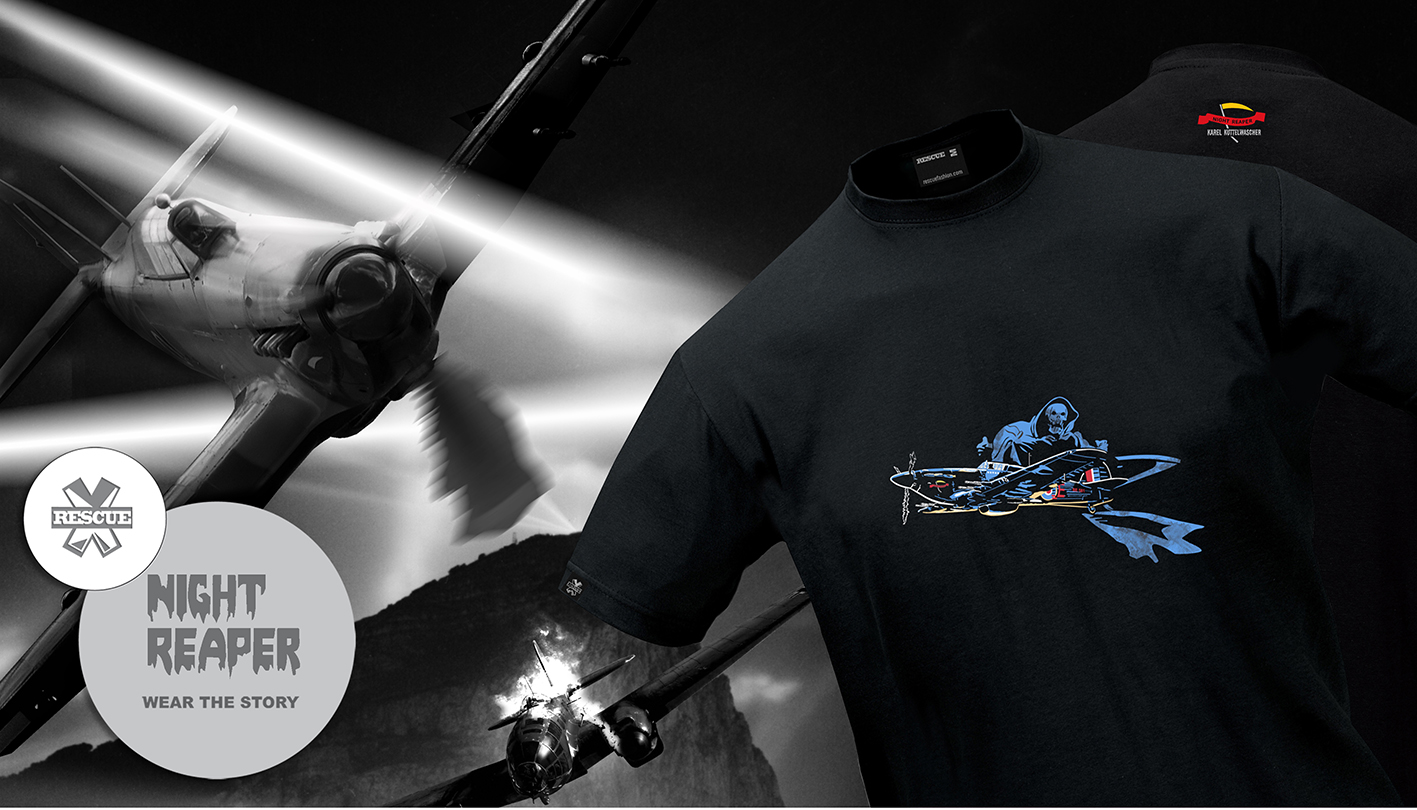 Together with many other Czechoslovak pilots, he was able to make his way from Poland to France where he was drafted into the Foreign Legion to await the imminent outbreak of war. When war came in 1939, Kut was allowed to join the French Air Force and flew in the fierce but brief Battle of France of 1940. He claimed a number of German aircraft destroyed and damaged, but those were turbulent times and no records survive to verify these claims. 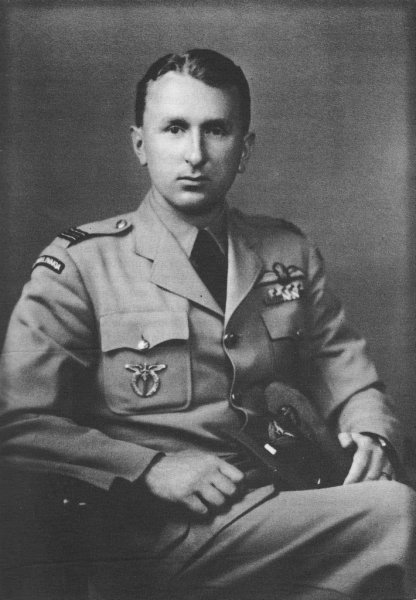 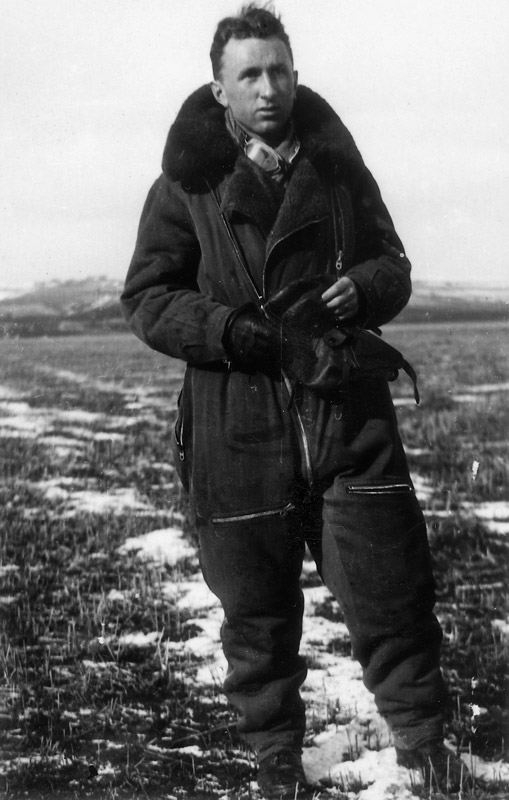 Then, when France fell after just three weeks of fighting, he managed to reach Algeria, escaped to Morocco, and took ship to Britain where he immediately joined the beleaguered Royal Air Force. During the war, the RAF formed four Czechoslovak squadrons – three fighter and one bomber. However, surprisingly, Kut never served in any of these Czechoslovak squadrons. Instead he was assigned to the RAF’s oldest unit, the legendary No. 1 Squadron.

He joined No. 1 on 3 October 1940 in time to earn his place as one of ‘The Few’. In fact, the British cannot be reminded often enough that, in the Battle of Britain, no less than one fifth of the RAF’s 3,000 pilots were not in fact British. Some 87 were Czechoslovaks including the RAF’s top-scoring pilot of the Battle, Josef František. 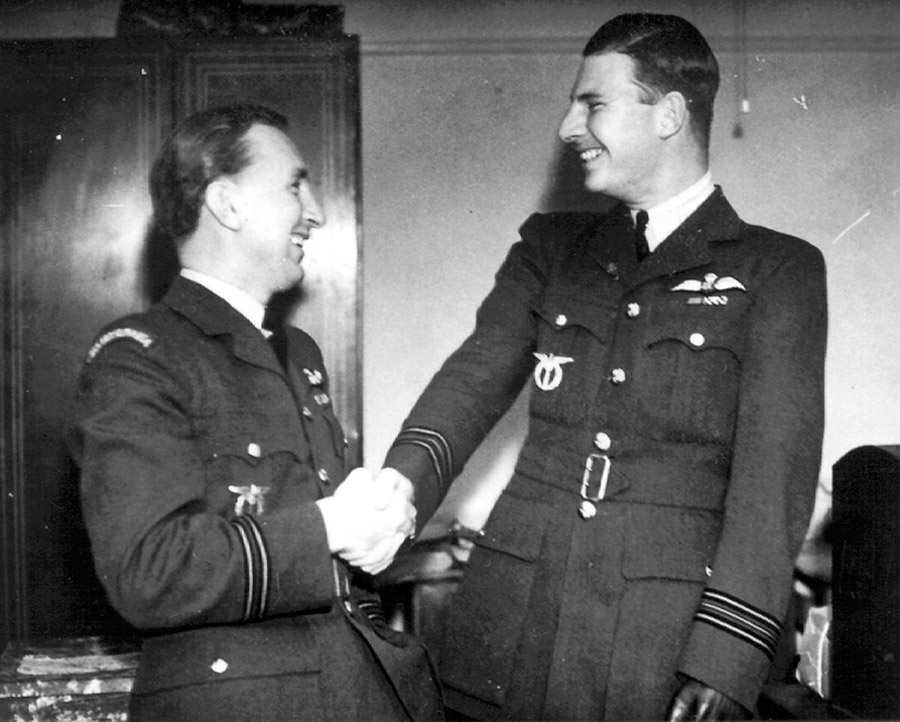 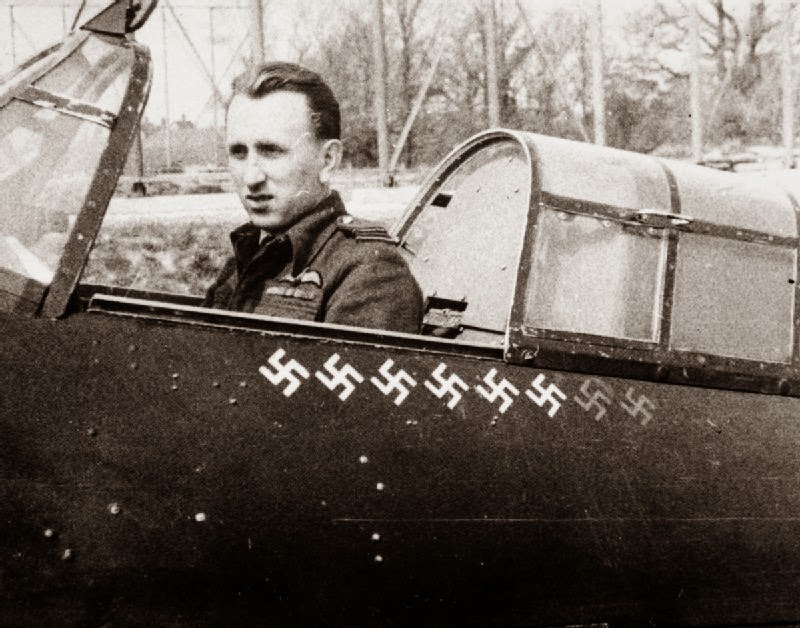 Kut eventually spent a full two years with No. 1 Squadron. During the early circus operations, in each of the months of April, May and June 1941, he shot down a Messerschmitt Bf 109 off the French coast – but his score would not remain at three. Meanwhile No. 1 Squadron experienced more excitement with their involvement in the famous Channel Dash when, on 12 February 1942, the two German battle cruisers ‘Scharnhorst’ and ‘Gneisenau’ raced from the French port of Brest and set sail for Norway. In a cannon-blazing attack on three accompanying destroyers, No.1 Squadron lost two aircraft, but Kut saw his shells exploding on the decks of his destroyer and judged the damage to be considerable.

By this time, No. 1 Squadron was based at its ancestral home here at Tangmere where it spent the year July 1941 to July 1942. At the start of November 1941, leadership of the unit was taken over by the charismatic Squadron Leader James MacLachlan, known to all as Mac. He had lost his left arm in an encounter with a 109 over Malta but, with the aid of an artificial limb, he was quickly back on Hurricanes. Kut – by now a Flight Lieutenant – and Mac – his one-armed Commanding Officer – soon became great friends and, during the night intruder missions that were to follow, keen rivals.

Previously, when German bombers attacked British cities, RAF fighters tackled them in our air space. By dramatic contrast, the idea of night intrusion was to engage the Luftwaffe aircraft over their own bases in France and the Low Countries. If the bombers could be attacked as they were coming in to land, they were particularly vulnerable, as the crews were tired and unsuspecting and the ammunition was probably used up. The runway navigation lights, combined with the slow speed of the bombers as they descended, all assisted RAF pilots in locating and destroying the enemy.

If the German bombers could be found as they were taking off, again they were vulnerable, but the crews were alert and the ammunition racks full. However, the marvellous advantage of this kind of mission, if successful, was that it destroyed not just the Luftwaffe aircraft but its bomb load, which could not then be dropped on British targets.

Usually intruder activity took place during the two weeks around the full moon – known by the pilots involved as “the moon period” – since the moon assisted flying as well as location of enemy bombers. During No. 1 Squadron’s three month period of night intrusion, there were four full moons: 1 April, 30 April, 30 May and 28 June. So the night intruder operation was a specialist exercise requiring a pilot with keen eyesight, cool nerves, and the ability to seize a chance that would only last seconds. Clearly it required a particular kind of aircraft and fortunately such an aircraft was to hand in the Hurricane. At the time of its intruder operations, No. 1 Squadron was equipped with the Hawker Hurricane IIC. This mark entered service in the late spring of 1941 and, of all Hurricane versions, it was the one built in greatest numbers. This Hurricane was powered by a Rolls Royce Merlin XX engine and it had a maximum speed of about 330 miles per hour. 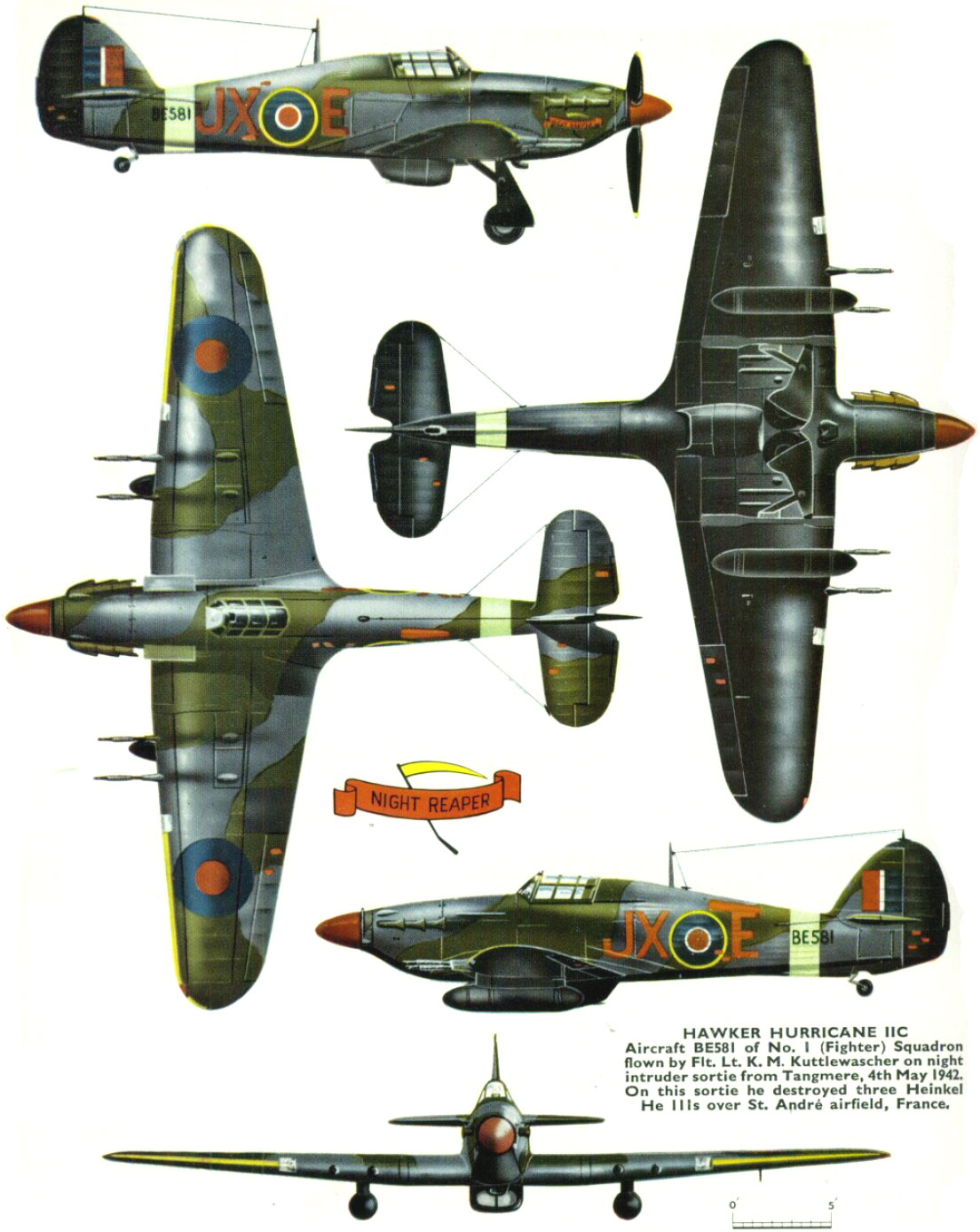 The Mk.IIC was fitted with four 20 mm Hispano cannon, two in either wing, in place of the 8 or 12 Browning machine guns on earlier marks, so there was much more power in the punch. However, each of the four cannon had only 91 rounds which was merely enough for about nine seconds firing. So every second had to count and, in Kut’s case, it most certainly did.

The intruder missions over the continent required plenty of fuel and so No. 1 Squadron’s Hurricane lICs were fitted with two 45 gallon drop tanks, one under each wing. This took the total fuel load to 184 gallons which, at a normal consumption rate, provided a range of some 900 miles enabling an operation of 3-3.5 hours.  Many intruder Hurricanes did not have the normal green and grey camouflage scheme. Instead they were painted matt black all over in order to make it harder to detect them in the night sky. This matt finish tended to increase drag and therefore reduce top speed, but the intruder – unlike the interceptor – depended more on concealment than speed.

Kut’s particular Hurricane had the RAF code JX:E – the designation of his aircraft since June 1941 – and the manufacturer’s serial number BE 581. According to many accounts, an emblem was painted on the starboard side of the engine cowling. It depicted a scythe in yellow and across it a banner in red carrying the name “Night Reaper”, a gruesome image which reflected the Czech’s acute sense of vengeance. 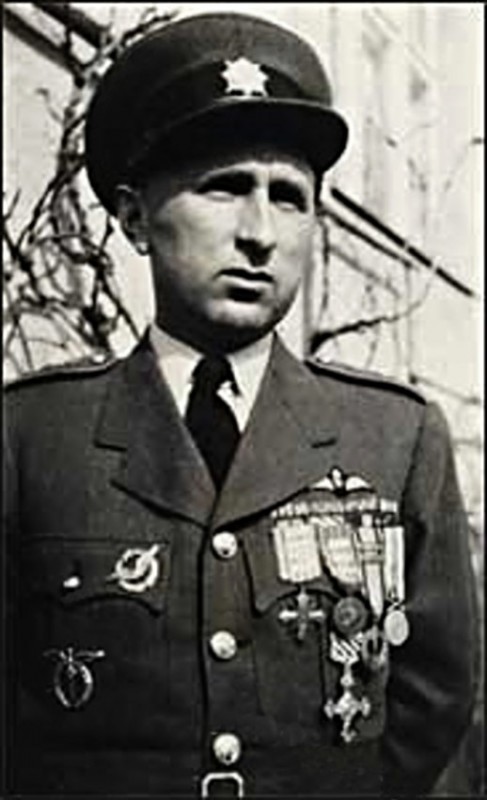 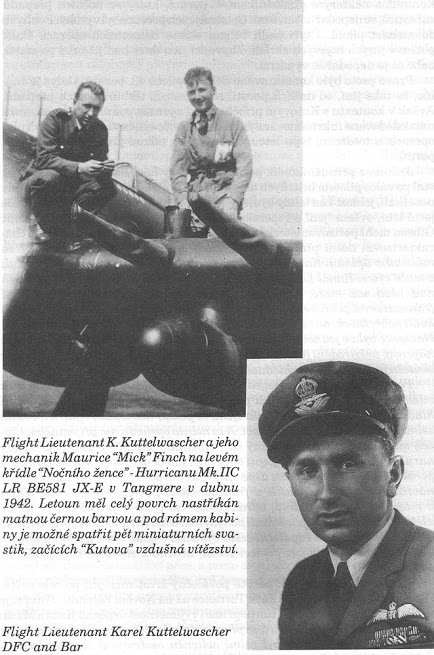 No. 1 Squadron’s night intruder operations started on the night of 1 April 1942, appropriately enough the official birthday of the Royal Air Force. The timing was no coincidence: the moon was at its fullest and brightest. For Kut at least, it was a baptism of fire. He found a Junkers Ju 88 taking off at Melun, south of Paris. Closing to only 100 yards, he raked it with cannon fire and it dived into the ground. Then he saw a similar aircraft still on the runway and damaged it in a strafing attack. Two weeks later, he knocked out his first Dornier Do 217 above St. André. 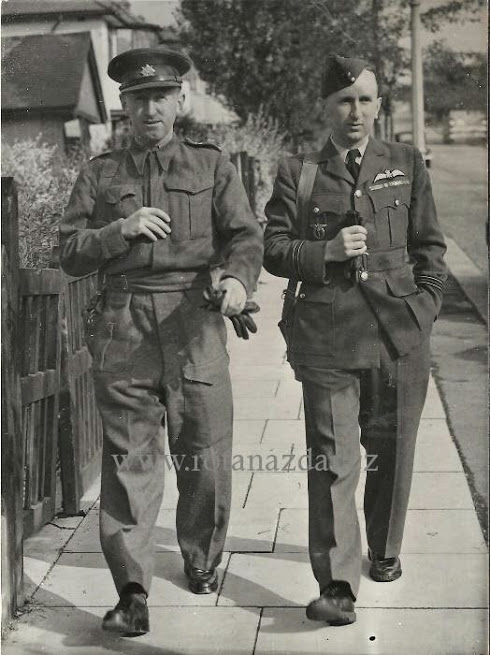 Then, on the night of 26-27 April 1942, Kut made a sortie that almost proved his last. Near Rouen, he dispatched a Dornier with an ease which proved deceptive until a stream of tracer bullets flew a mere ten feet above his cockpit. It was a Ju 88 night fighter on his tail and, in a quick and violent evasive manoeuvre, the Czech was able to reverse the roles and damage the Junkers before losing it in the darkness.

It was on the night of 4-5 May 1942 that Kut achieved his greatest intruder success with a stunning triple kill at St. André. Six Heinkel He 111 bombers were coming into land. Operating from dead astern, he blasted one Luftwaffe aircraft, then another, and then a third – three bombers destroyed in just four minutes, a feat unsurpassed on night intruder operations.

For the next month, Kut’s score remained static but then he achieved victories on successive nights. On 2-3 June 1942, he shot down another Dornier and the following night in rapid succession he destroyed a Heinkel, damaged one Dornier and destroyed another. The last of No. 1 Squadron’s night intruder missions took place on the night of 1-2 July 1942. Over Dinard, Kut found a couple of Dorniers and destroyed one and damaged the other. Remaining on the scene, he managed to locate yet another Do 217 and, using his last few seconds of ammunition, he dispatched it into a wood.

It was a flaming finale to the intruder operations of No. 1 Squadron. In the course of just three months, a total of 22 enemy aircraft had been destroyed and a further 13 damaged.

Squadron Leader James MacLachian had downed five aircraft and damaged a further three, collecting a Distinguished Service Order for his magnificent leadership. But it was his Czech Flight Lieutenant who accounted for no less than 15 of the kills and five of the aircraft damaged. In the process, Kut was awarded the Distinguished Flying Cross twice in a mere 42 days.

The rest of the war was much less eventful for Kut – mainly special duties with the Czechoslovak Inspectorate General, involving six months in North America, and then service with No. 32 Maintenance Unit at St Athan near Cardiff, where he test flew a variety of bombers.

At the end of the war, he returned briefly to Czechoslovakia but in 1946, on the day the communists effectively took control of his homeland, he flew back to Britain where he became a Captain with British European Airways. His premature death came on 17 August 1959 after a heart attack while on holiday in Cornwall. He was only 42.