Douglas Bader, a quintessentially British fighter pilot, who embodied much of the grit and determination that characterised one of Britain’s darkest hours, ‘The Battle of Britain’.

As a personal hero to us here at Rescue, we couldn’t possibly pass up the chance to revisit and celebrate one of the wars most famous fighter pilots on this the 105th anniversary of his birth.

Much has been said about the man, indeed many books have been written and even a film has been made that chart the incredible story of one man’s determination to prove that no matter what cards you have been dealt… the sky’s the limit! 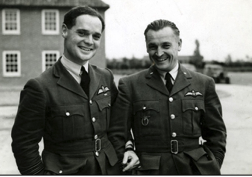 Take for example the situation surrounding his capture and subsequent incarceration in the infamous Colditz Castle:

As Bader descended under his parachute, he noticed “My right leg was no longer with me… the leather belt which attached it to my body had broken under the strain, and the leg, the Spitfire, and I had all parted company.” He was knocked unconscious on landing and woke to find two German soldiers removing his parachute harness. Bader was taken to hospital in St Omer. His missing right leg was recovered from the wrecked Spitfire and repaired. 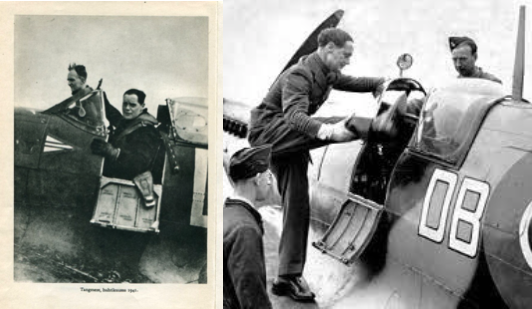 For most able bodied people the war would be over there and then, but not our Douglas…

…As soon as the leg had been repaired, he made his first attempt to escape. A rope made of bed sheets enabled him to climb down from a window, but he was soon recaptured and sent to Oflag VIB at Warburg. By that time the RAF had dropped a replacement leg by parachute, and Bader had determined to be “a plain, bloody nuisance to the Germans”.

And what a ‘bloody nuisance’ he was too…

After three months in Stalag Luft III, Bader was moved to Stalag Luft VIIIB at Lamsdorf, from which he made another attempt to escape. He and four others joined a working party outside the camp, intending to make their way towards the Polish border. The alarm was raised when a Luftwaffe officer called at Lamsdorf to visit Bader and he was found to be missing; he was arrested and returned to Lamsdorf. A few days later Bader was transferred to Colditz Castle – Oflag IVC. With typical boldness, he told the Germans that he expected “to travel first class and be accompanied by a batman and an officer of equal rank.” Colditz was thought to be escape-proof, and Bader remained there – making life difficult for his captors.

One particularly unusual incident involved the delivery of a replacement leg over St. Omer in August of 1941. As this teleprinter* message testifies, the Germans were keen to lend a hand in delivering a leg!:

The Germans had offered to guarantee safe passage to an aircraft carrying a spare leg. The offer – which would have given the Germans welcome publicity – was turned down, and the leg was dropped by a Blenheim taking part in a bombing raid.

However these are just a few of the many anecdotes that combine to paint a picture of an iconic legend that still resonates today. In memory of this great man we proudly raise a glass in salute and invite you to discover some of the more unusual stories that we have collected.

For example, did you know that the first Wing Commander for Czech pilots during the battle of Britain was non other than Douglas Bader himself!

We also invite you to take advantage of our special offer anniversary edition of the Douglas Bader T-shirt. Wear it with pride!

And one final comment from the great man himself:

Rules are for the obedience of fools and the guidance of wise men. Douglas Bader

A gentleman and a scholar!